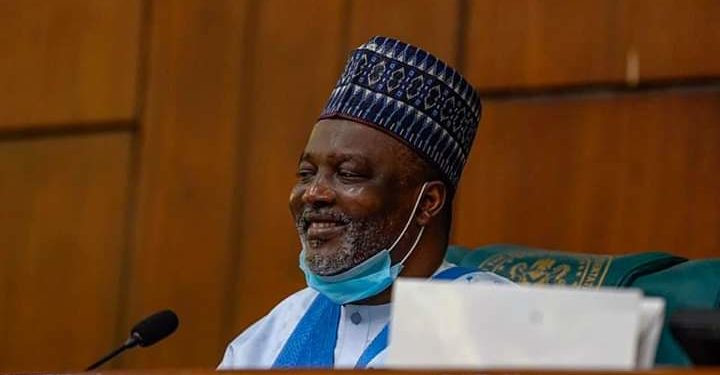 Deputy Speaker of the House of Representatives, Idris Wase (APC, Plateau) has said that the Minority Leader of the Senate, Enyinnaya Abaribe (PDP, Abia) should be in prison for failing to produce leader of the Indigenous People of Biafra, Nnamdi Kanu who he stood as a surety for in court.

Wase said this while responding to a Point of Order raised by Sada Soli (APC, Katsina) during plenary on Thursday May 6.

He backed his claim with the imprisonment of Senator Ali Ndume (APC, Borno) by Justice Okon Abang for failing to produce Abdulrasheed Maina, former head of the defunct Pension Reformed Task Team (PRTT) whom he had stood for as surety.

“Ordinarily, for failing to produce Kanu Nnamdi, he (Sen Abaribe) should be in prison, just like Ndume was taken to prison.

“I see somebody as Abaribe, who is the leader in the senate, championing that. Yes, there are many flaws. He bailed Kanu Nnamdi and during the ENDSARS, we knew what happened. Kanu then was the one who was asking for the head of Tinubu, destroy this, destroy that in the nation. But we have allowed him. He knew what happened to Ndume.

“Ndume for bailing Maina was taken to prison for not producing him, but we allowed this man to go as opposition person. And that is why they could send everything back to the person. I am a presiding officer, I wish to be neutral as much as possible.”

The Plateau-born Senator also accused House Minority Leader, Ndidi Elumelu of misrespresenting what happened at the executive session of the lower chamber of the national assembly.

“Mr Speaker, it was a confidential matter. You know the meaning of executive session. He couldn’t have gone there to report that one. Mr Speaker, I want to say that there is a kind of false platform that I am seeing because after that meeting sir, PDP caucus of both chambers went and had another discussion, a kind of build-up on the security situation. And I think Mr Speaker, we need to be serious.

“I think there is a need for us, as a system, to change our tactics. It is not about opposition. If you are going to do opposition, do opposition that is right, give factual views and also be part of the solution to problems.”

Uzoma Abonta (PDP, Abia) however countered Wase’s claim by stating that Nnamdi Kanu jumped bail after the military invaded his home. He also pointed out that the matter was already in court and making such a demand will amount to interfering in a judicial decision.

“The last contact the man in question had was with the military. The Senator who bailed the man was going to court regularly. The senator did not default. He was called to show cause and he showed cause successfully. Why is it a point of reference in the parliament?”