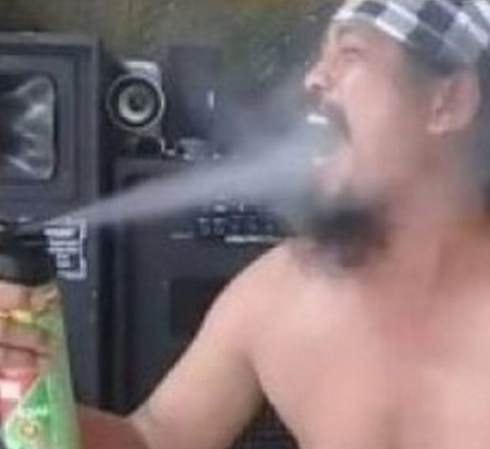 A man who became an internet sensation when he sprayed insecticide into his mouth has died.

The family of I Wayan Merta, who is also known as Ki Galang Pamungkas, have confirmed his death but said it was unrelated to the insecticide stunt.

In a video that went viral, the guru from Bali, Indonesia, was seen spraying Baygon insecticide into his mouth.

Concerned fans feared news of his death on Sunday, May 2, was the result of digesting the toxic chemicals in the insecticide but Ki Galang’s brother, I Nyoman Saputra, dismissed their claims.

Ki Galang built a reputation as a spiritual guru in Bali but it was only when a video of him ingesting insecticide went viral that he found fame,

His brother Saputra explained he died at a local hospital in Jimbaran, Bali, and insisted doctors had produced a medical record proving his cause of death was due to a heart attack.