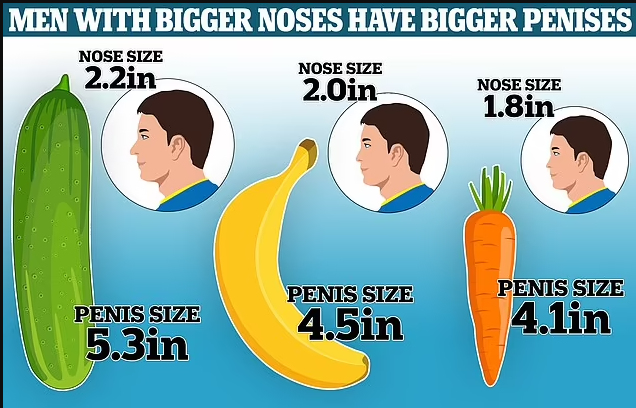 A scientific study has found that men with larger noses do have longer penises.

The new scientific study measured the size of 126 male corpses’ reproductive organs to see if there was any relation between the two. The researchers found a link between nose size and ‘stretched penile length.’

According to the study, those with larger noses had a ‘stretched penile length’ of at least 5.3 inches (13.42cm) and those with smaller ones had a penis measuring 4.1 inches (10.37cm) when erect – meaning that a bigger nose typically meant a bigger penis.

Published in Basic and Clinical Andrology, scientists from the Kyoto Prefectural University of Medicine in Japan did not examine why this link exists but instead focused on the connection between the dimensions of nose and penis sizes.

The researchers said: “The fact that nose size is related to stretched penile length indicates that penile length may not be determined by age, height or bodyweight but has already been determined before birth.”

They also pulled the penis up vertically as far as it would go was done and measured it in an effort to replicate the erect penile length. The Nose measurements studied the distance between a person’s eyes to where the nostril starts.

The procedures resulted in findings that men with noses smaller than 1.8 inches had penises up to 4.1 inches in length.

Those with a sniffer 22 percent bigger, measuring 2.2 inches long, tended to have larger penises measuring 5.3 inches.

For those with noses in the middle of this range, 4.5 inches was found to be the average penis size.

“Therefore, we consider it an interesting subject to pursue from now on.”